With apologies to Mark Twain, rumors of China’s economic demise have been grossly exaggerated. The mainstream financial media loves a crisis—real or fictitious—and China has been a favorite target. We’ve all seen headlines of a “property bubble” or looming “banking crisis.” But is China’s economy really teetering on the brink of disaster?

Not so fast, argues Mike Reynal, chief investment officer of Sophus Capital. Reynal believes talk of a China meltdown reflects a superficial analysis that misses the point. Rather than focusing on the headlines and GDP numbers, a deeper analysis reveals an economic backdrop with intriguing, long-term opportunities across an array of industries.

Reynal suggests investors take time to ponder the dynamics and longer-term trends before drawing snap conclusions on the Chinese economy.

When China began shifting away from a strict centrally planned economy three-and-a-half decades ago, the massive shift from an agrarian to urban economy was launched. Urbanization, privatization, and the gradual removal of price controls and protectionist policies have fueled lasting job creation. Current GDP growth may be lower than in the recent peak years of 2006/07, but we are only in the middle innings of the megatrend. Today, urbanization continues unabated, and China has publicly stated its goal to help 200 million-plus rural residents transition into new cities over the coming years.
China’s endgame is to transform the economy from a basic, export-driven emerging market to one resembling South Korea—with its impressive services and tech sector—over the next two decades. In order to do so, urbanization needs to rise from an estimated 55% of the total population today to close to 70%. This trend supports a bullish long-term investment thesis.

When talking about the Chinese economy, investors tend to focus narrowly on exports and the industrial clusters such as those in Zhejiang and Guangdong Provinces. Yes, exports are important, but they remain a relatively low percentage of China’s growth, estimated at 22% of GDP. This is actually lower than many other emerging export-driven economies, such as Vietnam.  Today, the reality is that China is an enormous consumer society with rising discretionary spending and household income. Chinese society does have a very high savings rate, which reflects the lack of liquid investment options and the absence of a social safety net. However, the arrow is pointed upward for Chinese consumer spending. Consumer finance is still in its infancy and the consumer is under-levered. This consumption story remains one of the most powerful investment themes across emerging markets or anywhere. 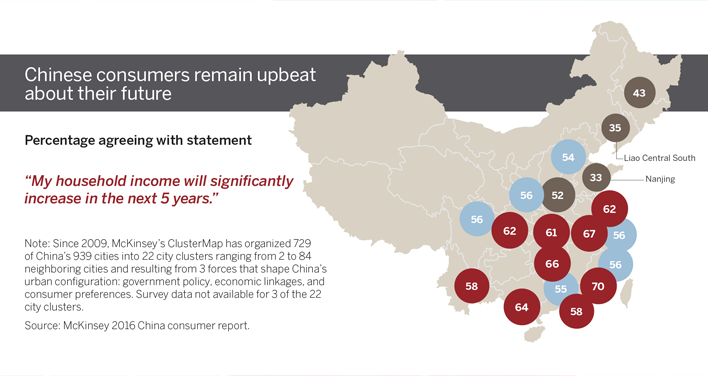 Once again, as headlines of “a coming debt bust” send investors to the sidelines, the situation on the ground tells a different story. The vast majority of China’s problem debt relates to overlevered State Owned Enterprises (SOEs) at the municipal or local level. These inefficient SOEs have long enjoyed government support, but those days are numbered. SOE and local government reforms are ongoing. Unprofitable industry segments like cement and steel are being aggressively consolidated and streamlined by fewer profitable players.

The financial system has not imploded and is unlikely to crash. For starters, China’s government debt is estimated at 50% of GDP, which is quite low by global standards. It would appear that the government has adequate capacity to step in, and it has shown a willingness to help troubled banks dispose of nonperforming loans. In addition, negative interest rate policies in Germany and Japan should help counteract rising rates in the U.S. and keep capital flows positive to emerging markets.

Of course no one is denying that there are risks to investing in China. But focusing on the often-negative headlines can conceal countless underlying positives, including:

• Modernization and rising productivity.
• A commitment to root out corruption and improve its regulatory framework.
• The maturation of capital markets, evidenced by the Shenzhen-Hong Kong Stock Connect program and the introduction of a domestic bond market that is being enthusiastically embraced by Chinese corporates.

The list goes on. The key point to remember is that the implicit deal that began three-and-a-half decades ago whereby Chinese citizens ceded political rights for economic inclusion has not changed. Chinese leadership understands the risk and the need to maintain growth and create greater opportunities for everybody. Thus the march toward a market-based system with less constrained capital flows is likely to continue.

We believe that active investors can exploit information and capital inefficiencies inherent to Chinese equities. Some of the more intriguing opportunities are rooted in the powerful consumption and lifestyle trends, ongoing infrastructure and transportation improvements, and the deeper penetration of technology and the Internet.

Past performance does not guarantee future results.

The information and statistical data contained in this material were obtained from third-party sources believed to be reliable; however, Victory Capital does not guarantee the accuracy of the information or data, and the information and data may differ from information provided by Victory Capital. Any opinions, projections or recommendations in this report are subject to change without notice and are not intended as individual investment advice. Investing involves risk, and there is no guarantee any investment will be profitable, especially in extreme market conditions.

Loss of principal is possible. The value of an investment will fluctuate in response to macro factors such as general economic conditions, interest rates, currencies and the political environment as well as changes in the prospects of particular companies, including market, liquidity, credit and management risks.

Scouring the Globe for Alpha

Capitalizing on the potential of emerging markets equities takes unique skill. Sophus Capital is a diverse group of professionals long on experience with a proven process that marries the best of analytical tools with fundamental research.

Headed Down a Rabbit Hole?

The threat to globalization must be acknowledged, but history suggests it won’t be derailed