Is The Party Over
is-the-party-over

Is the party over?

As we turn the page into 2020, the fact we are still in the longest running economic and market cycle has no bearing on the its future. There is no definitive expiration date. It’s just not that easy, folks. Perhaps this bull has been running so long because it had so far to recover from the depths of the Global Financial Crisis over a decade ago. Nobody knows for certain.

Yet those who are focused on this “longest-ever” factoid may be missing the key point. Better might be to step back and consider this market within two other historical contexts: valuations and liquidity. Based on that analysis, investors might choose to make some portfolio adjustments. 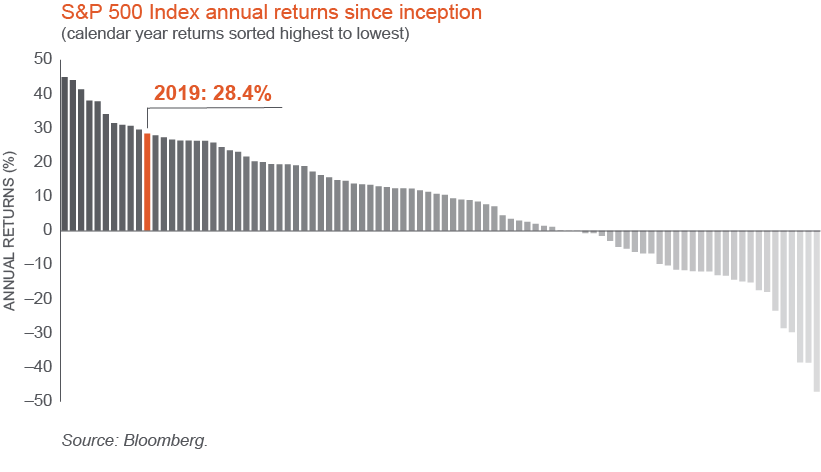 At year end, the S&P 500® Index was approaching its highest valuation level since 1999. While it hasn’t yet matched that historical level just yet, it is indeed in the stratosphere, keeping company with another infamous year, 1929. Moreover, the entire stunning rally in 2019, which represented the eleventh highest calendar-year returns since 1927, was from multiple expansion, not earnings growth.

It is true that the “overvalued” argument is not new and has left many investors in the dust and on the sidelines. Yet we also know what typically happens when market sentiment gets a little too ebullient and concludes that history no longer matter because we’re in a new era of innovation that requires a new way of valuing companies. As Winston Churchill allegedly said: “Those who fail to learn from history are condemned to repeat it.”

History suggests stock valuations are an excellent measures of price performance in the long-term, despite their shortcomings as a near-term indicator. Eventually, investors realize that valuations are ultimately tethered to the fundamentals of corporate earnings’ growth, and this pulls stock prices back towards the mean. That might be up or down, depending on sentiment and where we are in the cycle. So while we acknowledge that valuations are a poor timing tool, valuations matter. 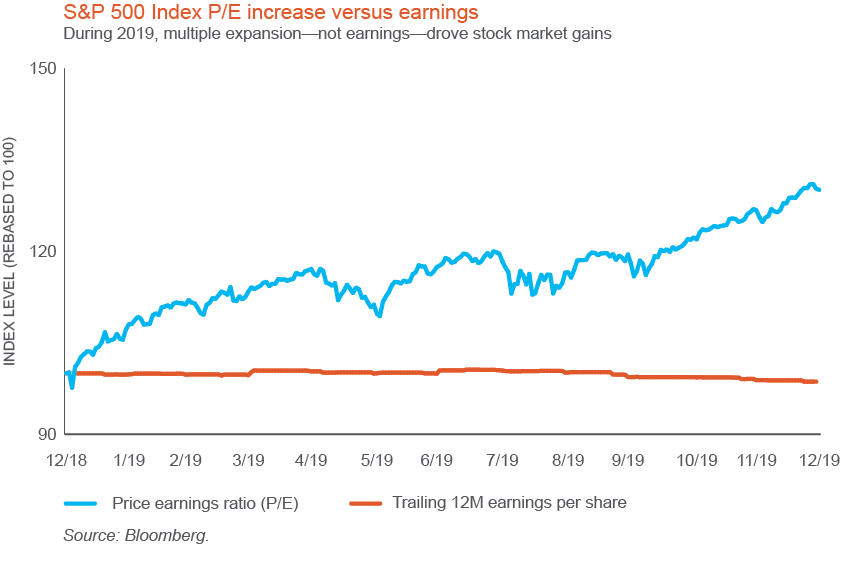 Still, the large-cap tech companies of today are not the dot.coms of yesteryear. Anything but. Many of these tech companies are clear innovators, displacing old incumbents in a range of industries that were ripe for disruption. In fact, many of these tech companies may well deserve their rich valuations and may continue to grow and flourish. But there is a point when even great companies with growing earnings can have a dangerous stock price. That point is not to be underestimated.

Take Cisco¹, a profitable and respected technology stalwart that has been dominant in its space over the long term, as just one example. At the peak of the tech bubble in March of 2000, Cisco had a very rich valuation, illustrated by a 381x P/E. In the ensuing years, Cisco continued to grow and make money while its stock price dropped almost 90%, collapsing the P/E to a still-elevated 26x. CSCO wasn’t necessarily a bad company, but ignoring its valuation back in 2000 was a bad idea.

Given the robust market rally of 2019, investors might also wish to question whether the most recent move higher has been fundamentally driven by the underlying earnings growth of companies, or is there something else afoot? The Federal Reserve’s “pivot” to a more accommodative policy just over one year ago certainly was constructive for stocks. And beyond the multiple rate cuts of 2019, The Fed also took some additional unusual steps that may have played a big part in the market rally. Interestingly, this Fed activity also has some historical resemblance.

Back in October 1999, the Fed pumped massive amounts of liquidity into the marketplace to stabilize and ensure the functioning of our financial system—specifically, to smooth any potential hiccups in overnight lending from the Y2K conversion (remember that?). Fast forward to present times. The Fed has once again been providing temporary but extraordinary levels of liquidity to this market, albeit for a completely different set of reasons. Yet investors need to ask whether all this accommodative Fed support was the catalyst that pushed stock prices ever higher in 2019?

These are tough questions, and there is no single definitive answer. And by no means are we perma-bears or doomsayers. But we also believe that history can help us be better investors and that valuations matter in the long run. Given this reality, investors may wish to:

¹Note: Victory Capital Management may currently include or may have previously included this security in various strategies managed by its independent investment franchises.

The value of the equity securities in which the fund invest may decline in response to developments affecting individual companies and/or general economic conditions. Dividends are never guaranteed. International investing involves special risks, which include changes in currency rates, foreign taxation and differences in auditing standards and securities regulations, political uncertainty, and greater volatility. Emerging markets involve heightened risks related to the same factors as well as increased volatility and lower trading volume. You may lose money by investing. There are no guarantees the funds will achieve their investment objectives and strategies may be unsuccessful.

Investments in bank loans may at times become difficult to value and highly illiquid; they are subject to credit risk such as nonpayment of principal or interest, and risks of bankruptcy and insolvency. Fixed income securities are subject to interest rate, inflation, credit and default risk. The bond market is volatile. As interest rates rise, bond prices usually fall, and vice versa. The return of principal is not guaranteed, and prices may decline if an issuer fails to make timely payments or its credit strength weakens.

ETFs have the same risks as the underlying securities traded on the exchange throughout the day. Redemptions are limited and often commissions are charged on each trade, and ETFs may trade at a premium or discount to their net asset value. There can be no assurance that an active trading market for shares of an ETFs will develop or be maintained. The ETFs are not actively managed and may be affected by a general decline in market segments related to the Indexes. The ETFs invest in securities included in, the Index, regardless of their investment merits. The performance of the ETFs may diverge from that of the Indexes.

LinkedIn, Twitter, and any other social media platform are owned by third parties unaffiliated with Victory Capital. Victory Capital is not responsible for the privacy or security policies at these sites or other third party sites to which they provide further links. For Victory Capital’s privacy policy, please visit the Policies page on www.vcm.com. Please do not post any information you wish to keep private on this page.

Judgments about a particular security, markets or investment strategy may prove to be incorrect and may cause an actively managed ETF to incur losses.

Victory Capital does not endorse and is not responsible for any ads, content, products, advice, opinions, recommendations or other material of third party sites that may be promoted via advertising within social media properties.

Content on Xchange, the Victory Capital Blog, is not intended to be relied upon as a forecast, research or investment advice, and is not a recommendation, offer or solicitation to buy or sell any securities or to adopt any investment strategy. The opinions expressed are as of the date posted and may change as subsequent conditions vary. The information and opinions contained in each post are derived from proprietary and non-proprietary sources deemed by Victory Capital to be reliable, are not necessarily all-inclusive and are not guaranteed as to accuracy. This material may contain “forward-looking” information that is not purely historical in nature. Such information may include, among other things, projections and forecasts. There is no guarantee that any forecasts made will come to pass. Reliance upon information in this material is at the sole discretion of the reader.

This material does not constitute a distribution, offer, invitation, recommendation, or solicitation to sell or buy any securities; it does not constitute investment advice and should not be relied upon as such.  Investors should seek independent legal and financial advice, including advice as to tax consequences, before making any investment decision.

Find out more about the background of these firms on FINRA's BrokerCheck.

Nasdaq is a registered trademark of Nasdaq, Inc. and its affiliates (together,“Nasdaq”) and is licensed for use by Victory Capital. The product(s) are not issued, endorsed, sold, or promoted by Nasdaq. Nasdaq makes no warranties as to the legality or suitability of, and bears no liability for, the product(s). Nasdaq is not affiliated with a fund or advisor.